Broadly, my research focuses on the mechanism that shape forests.  In my dissertation research, I focused on the importance of regeneration dynamics in shaping forest community diversity at multiple spatial scales in eastern US forests.  My research combines broad-scale forest inventories and extensive fine-scale forest census data with experimental tests of mechanisms in greenhouse studies in an attempt to determine the important drivers in seedling establishment and survival.  I continued this line of inquiry in my post-doctoral work, while paying particular attention to forest dynamics.

Previously, I was working an analysis of global trends in tree mortality at Los Alamos National Lab.  Our aim was to better characterize the influence of drought on trees in the tropics. Ultimately, we will validate and update the coupled climate and vegetation models to better reflect trends in demography to create better forecasts of the future.

I worked in the tropical forests of Panama to understand the key drivers behind seedling survival.   Dr. Liza Comita and I analyzed of long-term seedling dynamics at the Smithsonian Institution's 50 ha plot on Barro Colorado Island.  In collaboration with other CTFS scientists, we aim at understanding the relative contributions the abiotic and biotic components of this well characterized forested ecosystem to the persistence and survival of tropical tree species. This work was recently published in the Proceedings of the Royal Society of London B.

My dissertation research focused on analyzing the patterns of seedling recruitment in the forests of the eastern United States. We addressed potential mechanisms that could create these patterns.  I focus on the pattern of seedling establishment with respect to conspecific adult tree abundance.  My work utilizes multiple spatial scales to address the fundamental gap in community ecology of how local processes influence broad scale biogeographical patterns.

At the finest scale, I conducted greenhouse experiments to test tree species for plant-soil feedbacks as a mechanisms for recruitment failure.  I found that two of five species investigated had signals of negative feedbacks with soil biota.  The results suggest that testing many more species for these plant-soil feedbacks across their respective ranges holds great merit for understanding the processes that shape forest communities.

At the forest scale, I established the Indiana University Forest Dynamics Plots (IUFDP), a 25 ha research plot at Lilly Dickey Woods.  The plot has been included in the Smithsonian Institution's Forest Global Earth Observatory (ForestGEO) system and will serve as a long term research area.  At the IUFDP and two other ForestGEO forests, SCBI and Wabikon, I mapped and tracked almost 10,000 seedlings for a year, in order to determine if seedling mortality was related to conspecific or heterospecific density and a suite of abiotic variables.  We found that while some species survival was significantly related to abiotic factors, overall there was species specific density dependent mortality occurring in these forests, which suggests that natural enemies either in the soil or possibly herbivorous insects could be having negative effects on the success of tree seedlings consistent with the Janzen-Connell Hypothesis.

At the continental scale, I described the patterns of seedling and tree coexistence for over 130 species occurring in the eastern US.  Using the USDA Forest Service's Forest Inventory and Analysis database.  We found that rare species tended to display signals of strong conspecific negative density dependence.  Further, the greater the strength of this signal the greater the regional tree diversity.  This work was published in the journal Science in May of 2012.

Finally, I tested the direct role of a non-native invasive grass, Microstegium vimineum, in altering the success of tree seedling regeneration as well as the indirect interactions of herbivores in a multi-site field experiment that included recently harvested forests and forests that had not had timber harvests in quite some time. We found that there was great promise in restoring forest seedlings after removal of the invasive grass, especially in recently harvested sites, but herbivory must be controlled to insure seedlings get off to the best start possible. (The results of this study are available online here) 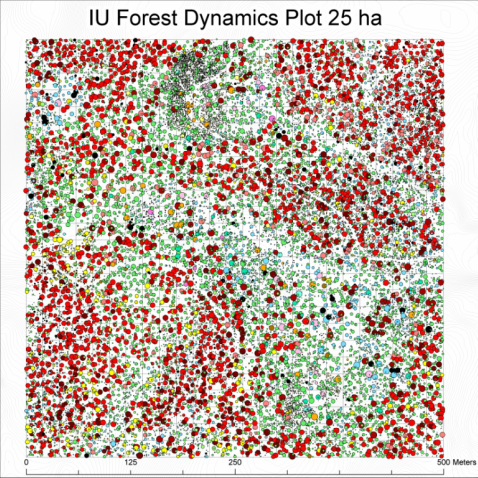 To the right is a map of the 25 ha Indiana University Forest Dynamics Plot.  The dots represent individual trees and the size of the dot is scaled to the diameter of the tree.  Each species is represented by color (red tones are oak species and green tones are maple species, which are the two most common genera on the plot).  There are almost 30,000 woody stems on the plot that include 35 species of tree and shrub.  There are seven trees on the plot that are over 1 meter in diameter!


The forest lies at the northern edge of the unglaciated portion of Indiana where there is a good deal of topographic relief.  The forest canopy trees are around 150 years old which puts this forest in the early stages of old growth conditions in the central hardwoods forest region.  The site has not been subject to timber harvesting in at least 100 years and probably longer.  The site can serve as a reference condition for the surrounding forest matrix.  We will follow this forest as it copes with future climates.